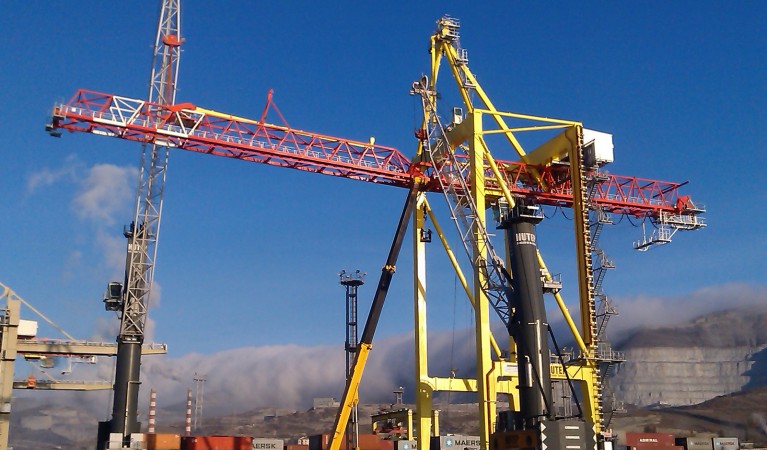 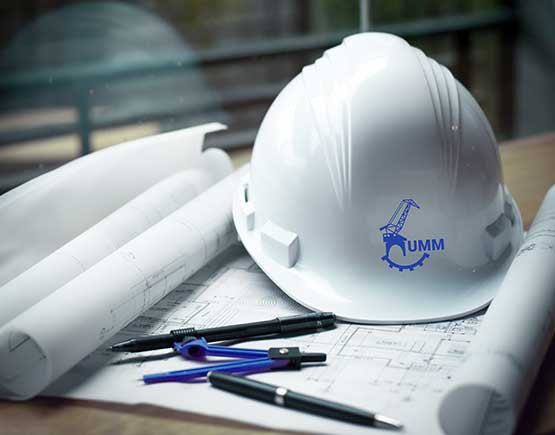 The company YUZHORMORMONTAZH (hereinafter – UMM) is a well-coordinated team of highly qualified staff who loves the installation business and directs all their efforts to exceed their own achievements and anticipate the expectations of their customers. Our motto is “Easy to lift with UMM” and this means that we strive to do our job so that it is always easy for our customers to lift their heavy loads and the business as a whole.

UMM is a leader in Ukrainian construction and installation market field, as evidenced by professional experience and an arsenal of implemented projects over three-quarters of a century - 3.5 thousand completed projects. The resource base of UMM combines highly qualified personnel of engineering and installation crews, its own fleet of 20 units wheeled vehicles, including 7 units of mobile heavy cranes with a lifting capacity up to 180 tons, 11,387 m2 area of production workshops and 1,500 m2 of warehouse space, as well as a berth with 75 tons crane in the area of ​​the existing shipping channel on the Dnieper River.

Read more
Years in the market
Staff
Implemented
projects
м²
Production
areas
Services
Installation
Installation of all technological facilities is always associated with the ability to work with expensive equipment and therefore it is soRead more >>
Service and diagnostics
A quality service of cargo handling mechanisms is the foundation for normal operation and in order to organize theRead more >>
Freight transportation
The freight transportation market has a saturated competitive environment, while transportation of oversized cargoes hasRead more >>

Cranes for rent
Truck cranes are in widespread demand for various cargo operations, and heavy truck cranes allow you to perform the mostRead more >>
Large vehicles relocation
When it comes to relocating large machines, it is necessary to solve a whole range of tasks related to preparation,Read more >>
Products 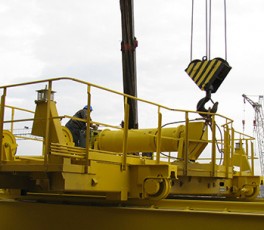 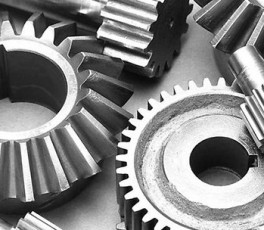 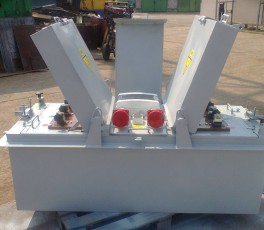 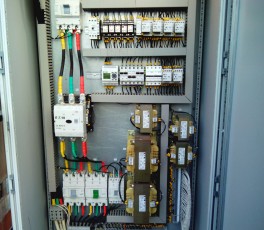 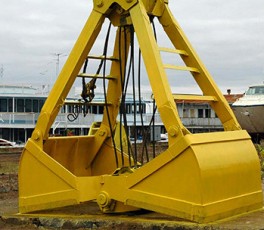 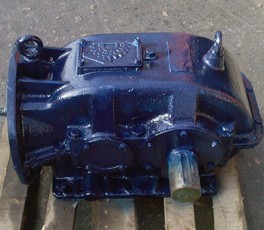 Gearboxes For portal cranes, gantry cranes, bridge cranes and truck cranes
All products
Get expert advice in lifting technology
To get the consultation
Projects 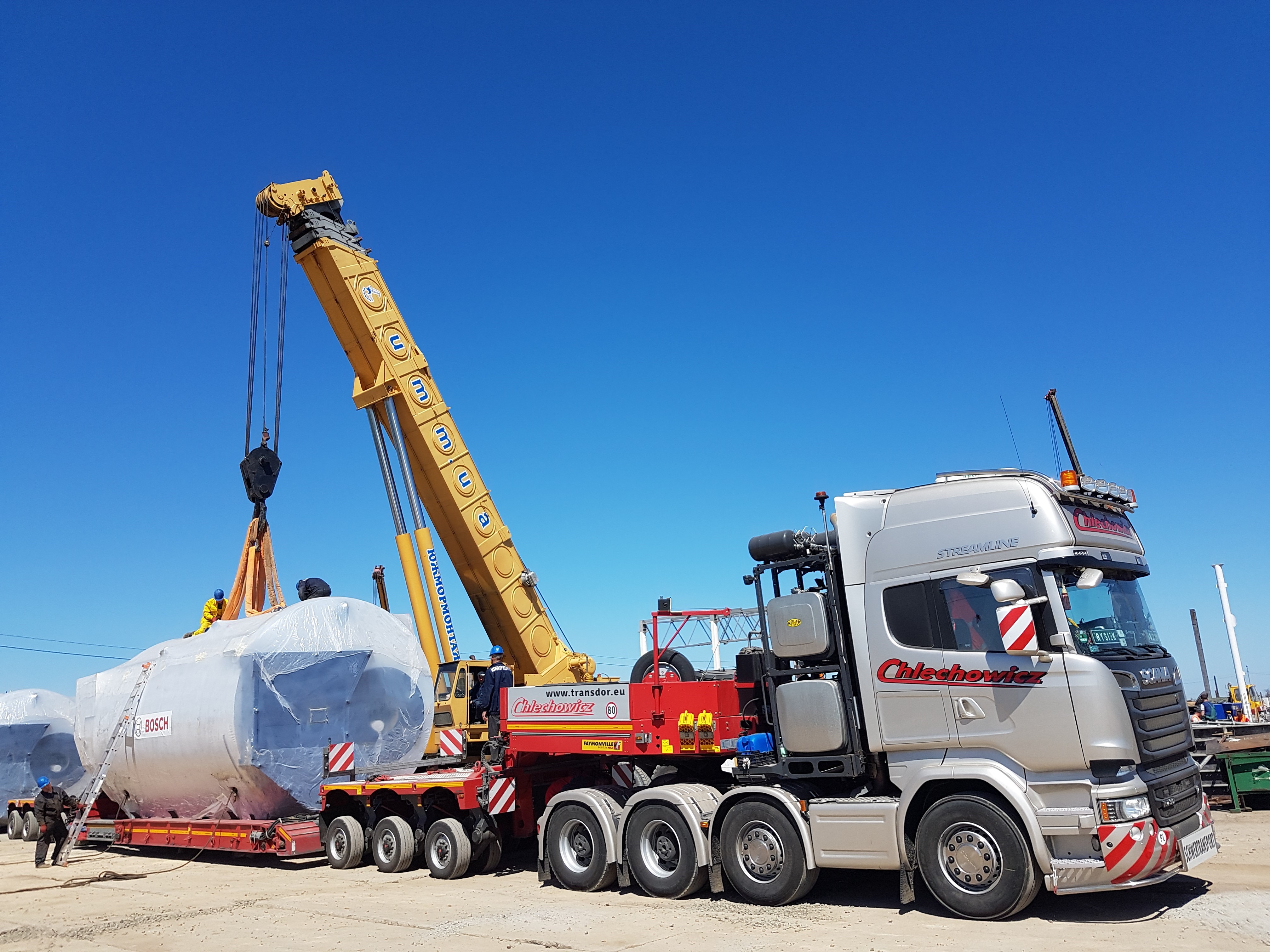 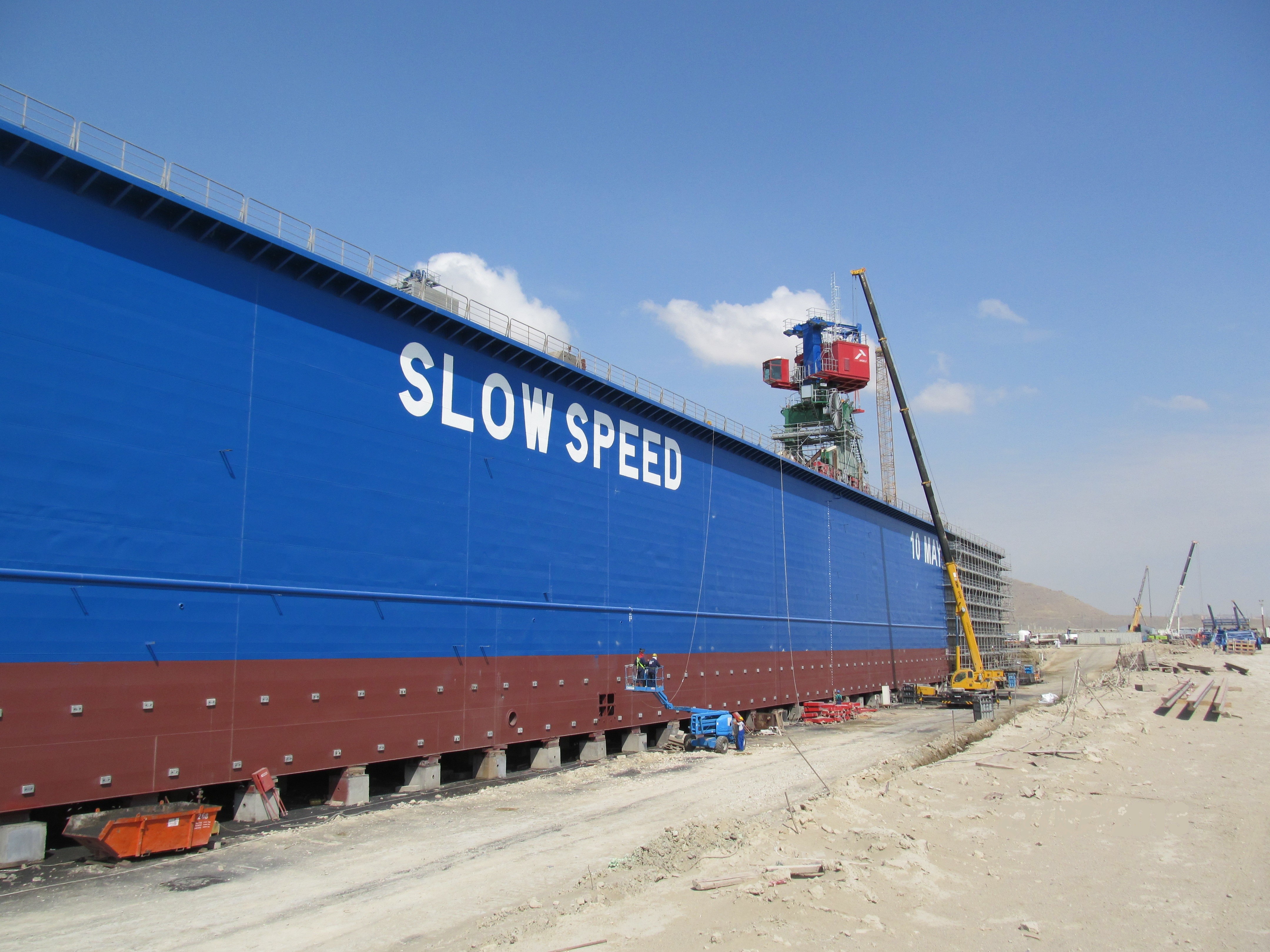 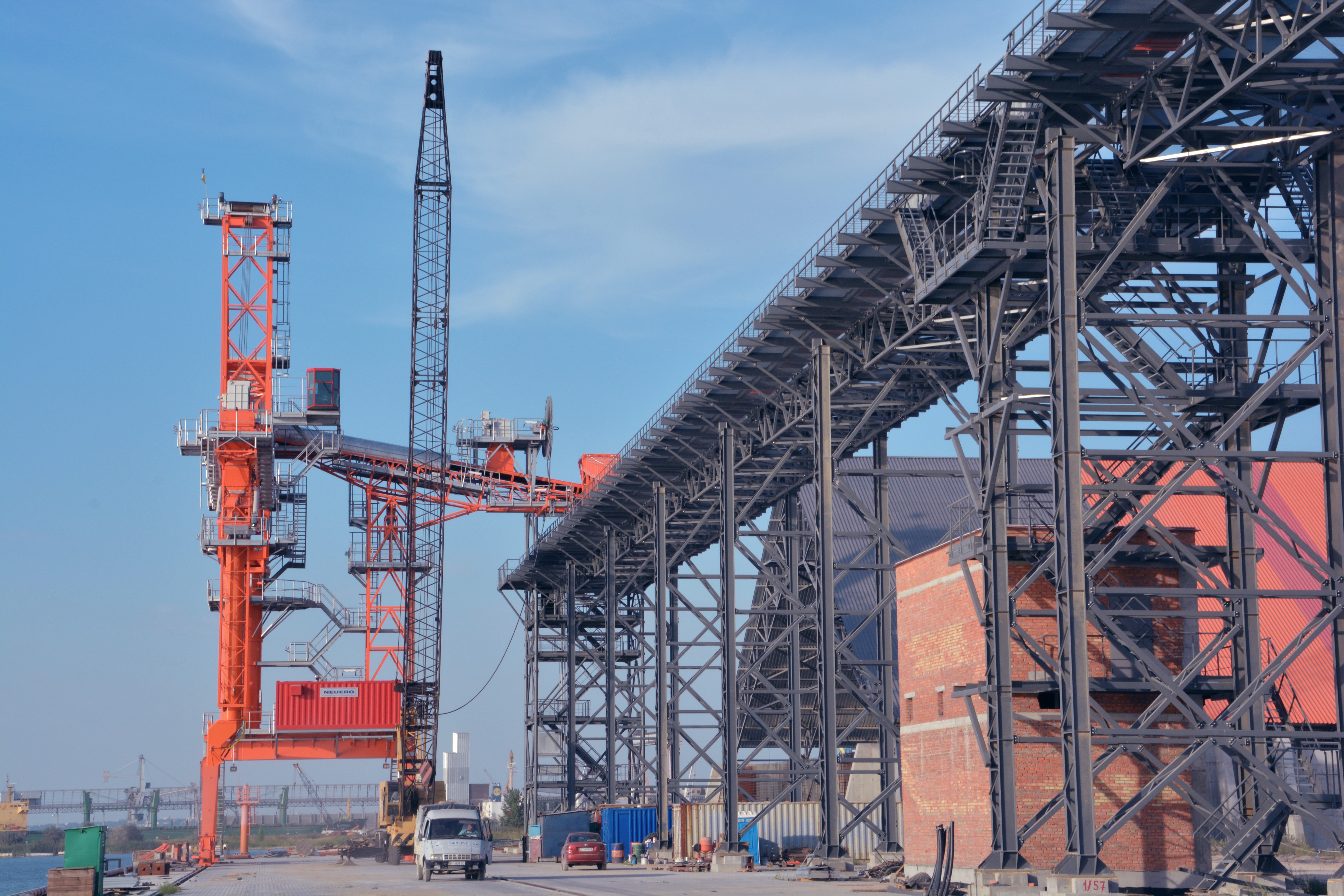 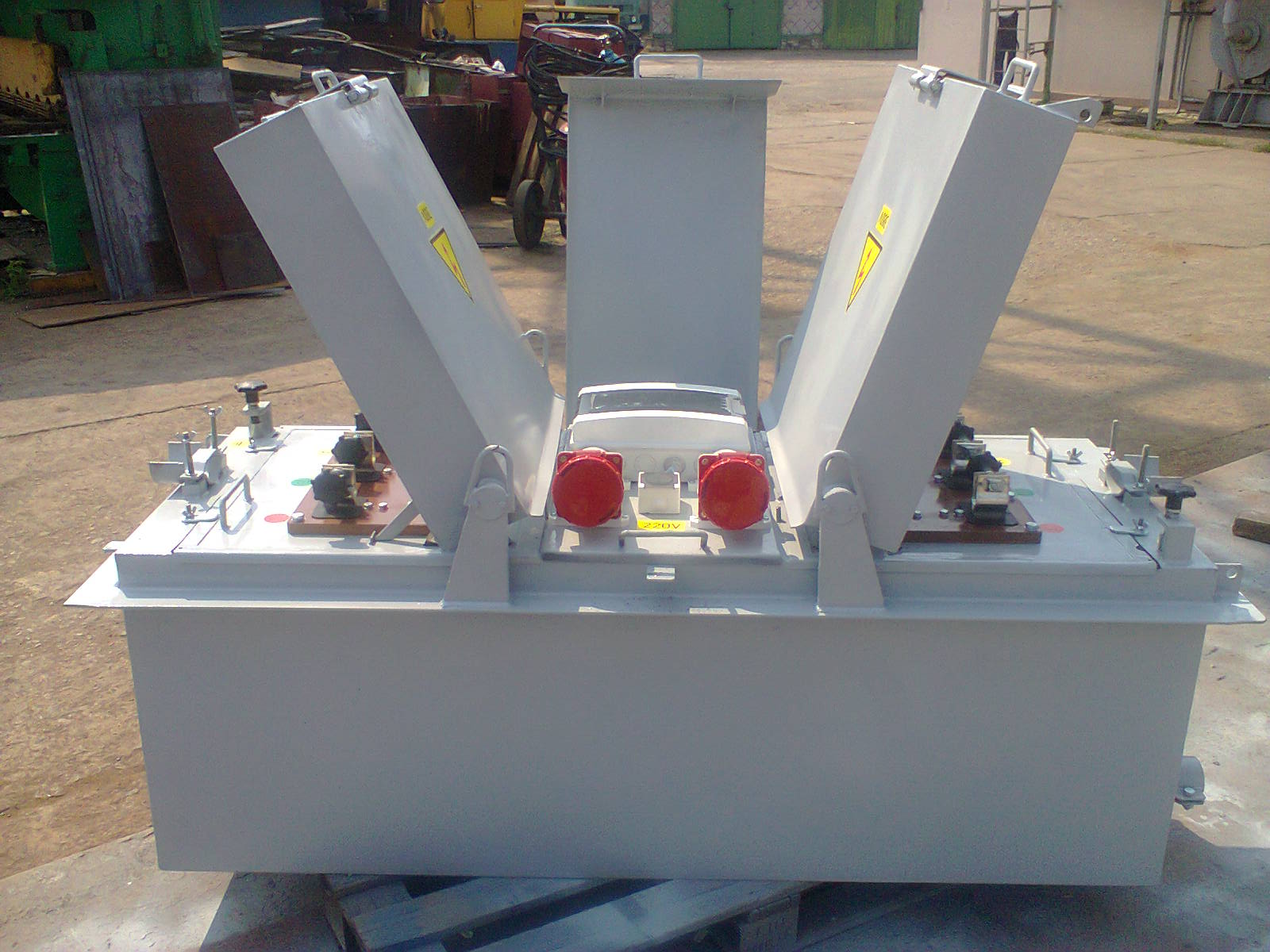 UMM CELEBRATES ITS 75TH ANNIVERSARY On June 5, 1944, Sergey E. Endeka registered the first order of the company, which for 75 years of its development managed to retain its leading position in the market of installation and service of hoisting-and-transport machines in Ukraine, which is confirmed by the experience and the arsenal of implemented projects - 3.5 thousand completed projects. About 70% of the projects were implemented in the transport industry, and the remaining 30% - in mining, diamond mining, metallurgy, energy, engineering, agriculture, mining, chemical, shipbuilding, and ship repair industries. One of the key features of UMM, which our clients have in common, is the solution of non-standard complex tasks in installation and repair work, which few are able to take up. During the last decade, UMM continues to strengthen its own positions in traditional segments of its activity - assembly, and service of maintenance and service of cargo handling machines and also pays more and more attention to market tendencies, timely adjustment of a strategy of development of the company and realization of new market opportunities. One of such opportunities for the company was the development of a new niche - the agricultural sector of Ukraine, which is the engine for the development of the domestic economy. Today, it should be noted that UMM is the leader in the number of mounted ship loaders in the ports of Ukraine. UMM installed 8 ship loaders, which eventually increased the total capacity of specialized grain terminals in Ukraine by 2-3 million tons per year and significantly increased the export potential of the Ukrainian grain market. The company's management is sincerely grateful to its staff and all customers who have supported and supported UMM since its foundation for 75 years. True to our motto "EASY TO LIFT WITH UMM", we will continue to do our job so that our customers always had easy to lift their heavy loads and business as a whole. Read more>>

UMM has successfully performed the unassembled transportation of gantry cranes by sea The specialists of Yuzhmormontazh (hereinafter - UMM) in the 4th quarter of 2018 carried out transportation by water of two gantry cranes "Mark-45" in the assembled form - an operation that saved the customer not one hundred thousand U.S. dollars and 4-6 months of operation of additional transhipment facilities with a capacity of 1200 tons / hour. Cranes were relocated from the port of Odessa to the port of Yuzhny. "Mark-45" is a universal portal crane that combines a maximum outreach of 45m with a maximum load-carrying capacity of 45 tons. <br>According to a specially developed project with the use of a specialized fleet, in particular, with the help of two paired barges and one tugboat, two gantry cranes (with a total weight of 940 tons) were transported and then installed at the berth No.9 of the State Enterprise MTP YUZHNY. Loading and unloading of cranes were carried out with the help of specialized equipment, technological equipment for moving gantry cranes and berthing loaders weighing up to 1200 tons by the method of knurling/rolling out to the floating vehicle. <br>The main line of business of UMM is traditionally installation and service of lifting and transportation equipment, these works are carried out by employees since the foundation - 1944. Experience and knowledge of the company's employees allow us to develop technologies of installation, dismantling, repair, transportation of lifting and transport equipment of any complexity. Over the past 20 years, the UMM team has completed more than 30 projects for the relocation of large hoisting equipment. <br>Today UMM specialists work in seaports, river ports and at specialized terminals, metallurgy and mining industry enterprises, agricultural sector enterprises, shipyards, oil refineries, energy sector enterprises (hydroelectric power plants, thermal power plants, thermal power plants, hydroelectric power plants). Trust professionals! Read more>>

Results of the UMM children's drawing contest! On December 1, 2018, the weather made our children happy with snow... This means that snowballs, snowmen and red cheeks of children were the results of this day. At the same time, for the children who took an active part from the Kherson Tavrrichesky Art Lyceum in the competition of children's drawings on crane theme, there was also a sweet holiday from UMM, where gifts were presented to all participants of the competition. And in this publication, we share the unique creativity of talented children. Read more>>

UMM CELEBRATES HER BIRTHDAY The young 75-year-old company YUZHORMORMONTAZH (hereinafter – UMM) presents! Over the last three years, our company has been confidently engaged in improving its business system, and recently we have discovered that on the one hand, we have three quarters of a century of expert experience in the installation and service of lifting and transport machines, and on the other hand, as a market-based business structure relatively young and we are still ahead of us. However, today we can safely say that all Ukrainian companies are young, on which we all congratulate ourselves, as the entire business, which makes up the Ukrainian economy, acts as a market relatively recently, only 27 years old. At the same time, the first ten years, we can say, was the birth of the market, which was followed by a school for all Ukrainian businesses. The competitive environment turned out to be very aggressive, Western companies had a clear advantage in the market conditions, as for them it was a natural habitat for a long time. As we all know, not all industrial enterprises were able to survive in the market economy and it was really difficult time for business, people and country. And few people know that during the perestroika period, UMM was forced to take on different jobs that were not related to installation or lifting equipment, but we stood firm and became stronger. It is necessary to pay tribute to the leaders of the company UMM, who were able to preserve our most valuable resource, of course, it is our people, our professionals. We have also managed to preserve and even improve our technologies, equipment, machinery and production. In particular, one of the key leaders, who love installation business with all his heart and continues the traditions of UMM, is General Director Ildar Sirazeevich Gibadullin, who will turn 60 on October 6, 2018. As he himself puts it, UMM is a company of his life! And Ildar Sirazeevich's biography confirms this. In 1975, after graduating from school on Sakhalin, he entered the Odessa Institute of Marine Engineers, the Faculty of Port Mechanization, the dean of which was the legendary Kurochkin Leonid Yakovlevich. On 12.09.1980 right after the institute, at the invitation of Olgerd Sergeevich Metus, the respected director of the company Yuzhmormontazh, he came as a young specialist to the position of a site foreman. As the old residents of Yuzhmormontazh say, Ildar Sirazeevich showed his engineering skills at the first sites immediately, which allowed him to get a promotion to the position of foreman on 02.01.1983, then the senior foreman and then on 08.02.1999 gets the highest position for the engineer, namely the chief engineer of the company. On his engineering career Ildar Sirazeevich was not only able to become a highly qualified engineer, he also managed to develop leadership and entrepreneurial qualities, and as a result of 11.05.2004 he was elected as a team director of the company, and on 07.09.2006 he took the position of General Director, which he is to this day. Under his leadership, the company annually receives all kinds of awards in the field of construction and industry, including himself, Ildar Sirazeevich, in 2011 received the status of Honorary Worker of Construction and Architecture. Today, in the age of information and innovation, more than ever before, all modern companies are diligently developing, training, testing and implementing technological innovations, and it is simply impossible and unsafe not to do so in terms of business. So the company's staff under the management of a strong leader sees UMM as an international service company ahead. And for this purpose, we work on our internal transformations, rejuvenate and train personnel, taking care of our veterans, developing new markets in the installation of technological facilities in different industries, developing our production base, expanding the fleet of vehicles, supporting social projects and increasingly entering international markets. Read more>>
All news
Activity geography